As 2021 draws closer, Austin City Lutherans will mark ten years since Pastor Lynnae Sorensen, then serving Abiding Love Lutheran, invited fellow pastoral colleagues to a meeting to talk about the possibility of Austin ELCA congregations intentionally working together. At that initial meeting at a wine bar in downtown Austin, I sat alongside a number of pastor colleagues, including Michael Coffey, Fred Krebs, Mag Holm-Roesler, Jay Alanis, Brad Highum, Susie Schnelle and Brian Peterson. We christened this new group “Austin City Lutherans” and immediately humored ourselves that we were the other, much smaller, and not quite as famous, ACL.

At the meeting, we talked about the possibility of one of our Austin church campuses making the transition from worship gathering place to a hub of operations for city-wide supported social ministries. Each one promised to take the “hub of operations” message to the congregations they served, trusting for God’s Spirit to inspire ELCA Lutherans in Austin, together, to produce something new and purposeful.

Within a year, Pastor Highum suggested “More, Better, Together” for ACL’s motto at a formation committee meeting. It stuck.

In the spring of 2013, Pastor Krebs and the congregants of Prince of Peace Lutheran in SE Austin took a bold step in faith – spurred on by ACL’s nascent board of directors – to host Bread For All Food Pantry. Prince of Peace’s SE Austin location, and its proximity and ministry experience with low-income individuals and families made it the perfect place for BFA. ACL leaders toiled and planned for six months in preparation for BFA’s opening in September 2013. Experienced servants from Abiding Love’s food pantry provided a template for how to run a successful operation – from food pick up and storage, to repackaging, distribution, and recordkeeping. BFA partnered with the Capital Area Food Bank (now known as the Central Texas Food Bank) and set Monday evening hours of distribution from 6 – 7:30 p.m. to target working low-income individuals and families – these latter including children living in poverty.

In September 2020, BFA eclipses seven full years of service. We truly wish we didn’t have to have a food pantry – a more just and equitable world where all are fed is preferred – but current social and economic realities dictate that we do. All that we have is from God, and Jesus calls us to share what we have with those who lack necessities. With the level of inequalities that exist in American society and the accompanying difficulties faced by elderly folks on fixed incomes, by the disabled, and by children who live in poverty (at no fault of their own), we’ll be distributing food in Christ’s name for the foreseeable future.

Influenced by seeing many children come though the food line at BFA with their parents, Austin City Lutheran leaders – pastors and congregants – made another bold decision in faith. At a conference in April 2017, some fifty representatives decided ACL would endeavor to serve the same 78741 ZIP Code – Prince of Peace’s locale – with an early childhood education ministry as a way to further combat the devastating effects of poverty that afflicted many families living in the area.

I was most honored and excited to accept the call to serve as ACL’s director of community development, in March of 2018, to help lead the effort to establish an early childhood development center in an area of Austin categorized as a “childcare desert.” As part of my duties for this call, I visited different ACL churches on Sunday mornings in preaching and teaching mode. I shared the message that the ELCA had a scarce presence east of I-35 in Austin. The proposed childcare ministry would reestablish the ELCA’s presence on Austin’s historically neglected east side. The message was well received; individuals and congregations responded generously (and continue to do so!).

We – the ACL board, many ACL congregants, and numerous partners in Austin – worked together for almost two years to establish and open Mariposa Family Learning Center in January 2020. Sheila Pharis, hired as Mariposa’s director a few months prior to Mariposa’s opening, worked tirelessly to obtain state licensing and assembled an impressive team of teachers to educate toddlers and serve families in SE Austin.

With its own board of directors, led by Pastor Grevlos who serves as president, Mariposa FLC now operates separately from ACL. It’s fully expected, however, that ACL and Mariposa will always maintain a close, cooperative, and mutually beneficial relationship – akin to a healthy and good relationship between a parent and an adult child. Mariposa, it is also expected, will continue to benefit from the gracious support of ACL churches in terms of volunteers and financial commitments. Mariposa is now also receiving financial support from donors outside of the ACL family.

As ACL moves into a second decade of service in Christ’s name, Bread For All and Mariposa FLC will continue to be main points of ministry. Both BFA and Mariposa are poised for expansion of their services. BFA hopes to augment food services to neighbors with additional supports, including educational and advocacy programming. Mariposa looks to expand its physical facilities in order to serve more children and families in SE Austin.

The Apostle Paul, in Romans 12, encouraged believers: “Let love be genuine . . . extend hospitality to the stranger . . . associate with the lowly . . . serve the Lord.” Because, as previously mentioned, grand inequities exist in our society, there is abundant opportunity to serve neighbors in Christ’s name. Each of our individual congregations serves in various ways – as an organization, Austin City Lutherans goes beyond what individual congregations can do, enabling us to do “more, better, together” in the same name and spirit of our Savior.

May God’s Spirit continue to give us strength, vision, and purpose together in mission! 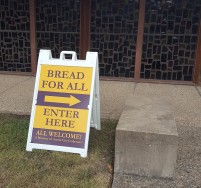