Thanks to the Austin American-Statesman for publishing this article in its July 21, 2018 edition. Below the image you can read the article, with its original title, in its entirety. 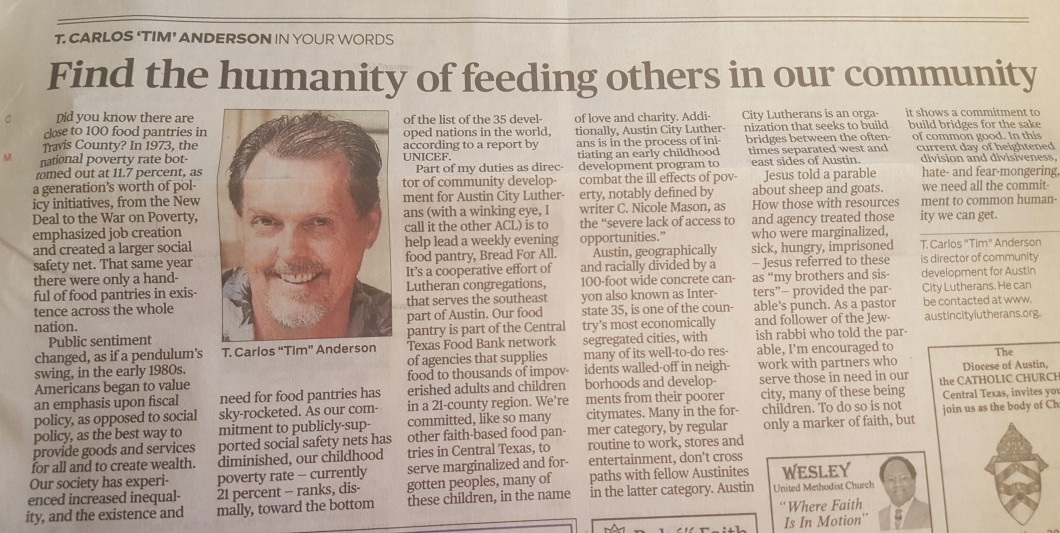 Did you know there are close to 100 food pantries in Travis County? In 1973, the national poverty rate bottomed out at 11.7 percent, as a generation’s worth of policy initiatives, from the New Deal to the War on Poverty, emphasized job creation and created a larger social safety net. That same year there were only a handful of food pantries in existence across the whole nation.

Public sentiment changed, as if a pendulum’s swing, in the early 1980s. Americans began to value an emphasis upon fiscal policy, as opposed to social policy, as the best way to provide goods and services for all and to create wealth. This emphasis has not changed since, and, as a result, American wealth has continued to set the pace in the global economy. Our society, however, suffers from increased inequality, and the existence and need for food pantries has sky-rocketed. As our commitment to publicly-supported social safety nets has diminished, our childhood poverty rate—currently 21 percent—ranks, dismally, toward the bottom of the list of the thirty-five developed nations in the world.

Part of my duties as Director of Community Development for Austin City Lutherans (with a winking eye, I call it the other ACL) is to help lead a weekly evening food pantry, Bread For All, a cooperative effort of Lutheran congregations, that serves the southeast part of Austin. Our food pantry is part of the Central Texas Food Bank network of agencies that supplies food to thousands of impoverished adults and children in a twenty-one-county region. We’re committed, like so many other faith-based food pantries in Central Texas, to serve marginalized and forgotten peoples, many of these children, in the name of love and charity. Additionally, Austin City Lutherans is in the process of initiating an early childhood development program to combat the ill effects of poverty, notably defined by writer C. Nicole Mason, as the “severe lack of access to opportunities.”

Austin, geographically and racially divided by a 100-foot wide concrete canyon also known as I-35, is one of the country’s most economically segregated cities, with many of its well-to-do residents walled-off in neighborhoods and developments from their poorer city-mates. Many in the former category, by regular routine to work, stores, and entertainment, don’t cross paths with fellow Austinites in the latter category. Austin City Lutherans is an organization that seeks to build bridges between the oftentimes separated west and east sides of Austin.

Many of us, in our formative years, benefitted from a healthy sense of social mobility—the opportunity provided by education and hard work to better one’s economic status. Unfortunately, numerous public policy decisions of the last thirty-five years—the era of fiscal policy emphasis—especially favorable tax cuts for the rich, have eroded American social mobility. Countless studies show that our revered social mobility is becoming a historical remnant and a present-day fantasy, especially for minority youth.

Jesus told a parable about sheep and goats. How those with resources and agency treated those who were marginalized, sick, hungry, imprisoned—Jesus referred to these as “my brothers and sisters”—provided the parable’s punch. As a pastor and follower of the Jewish rabbi who told the parable, I’m encouraged to work with partners who serve those in need in our city, many of these being children. To do so is not only a marker of faith, but it shows a commitment to build bridges for the sake of common good. In this current day of heightened division and divisiveness, hate- and fear-mongering, we need all the commitment to common humanity we can get.

The economic trickle-down that was promised in the early 1980s hasn’t reached all the way to the least of these whom Jesus called his brothers and sisters. Love and charity, yes, is needed—as is a commitment to more humane and community-building public policy.