Did you know that Bread For All is one of more than 60,000 food pantries or meal programs that assist Americans with food? Almost 50 million Americans – including 15 million children – deal with hunger on a daily basis. It’s estimated that one out of six Americans reported running out of food at least once in the past year. Comparably, in some European nations, this figure is one out of twenty. As of 2015, the poverty rate in the US was around 13 percent, with childhood poverty hovering over 20 percent. This latter figure is one of the worst of the thirty-five developed nations in the world.

In the early 1970s, poverty was at its lowest rate in the US – a shade over 11 percent – as the Johnson administration’s War on Poverty crested in effectiveness. There were a minimal number of food pantries in the country as governmental policy aimed to eradicate hunger. The memories of soup kitchens from the Depression era, still vibrant for a majority of citizens and politicians, supported a collective will to combat hunger. President Richard Nixon diminished the scope of some of his predecessor’s anti-poverty and anti-hunger programs, but commented during 1969, his first year in office: “That hunger and malnutrition should persist in a land such as ours is embarrassing and intolerable. But it is an exceedingly complex problem, not at all susceptible to fast or easy solutions. Millions of Americans are simply too poor to feed their families properly.”

By 1980, with the election of Ronald Reagan, the mood of the country shifted. Self-reliance, the great American virtue, reemerged as a dominant societal value. The War on Poverty, understood as a continuation of President Franklin Roosevelt’s New Deal, was declared “over.” The shift that occurred in 1980 can be summarized in the following statement: American society emphasized financial policy over social policy. A vibrant economy would feed more Americans – abundantly and efficiently – than would governmental programs. Americans would deal with social problems with greater reliance upon the private sector, and differentiate itself from the European nations that provided large social safety nets for their citizens. Two main drivers combined to specifically create the current “food pantry era” in the US: welfare reform and the shuttering of mental health institutions. Families struggling economically and a burgeoning homeless population found themselves in need of food. Self-reliance is a great American virtue, but so is compassion. Many religious organizations began to offer food to hungry neighbors. Volunteer-run food pantries, supported by donations, expanded exponentially. The food bank network – led by Feeding America, now the third largest charity in the US – mushroomed as well to work hand in glove with local food pantries.

The improved economic activity of the past thirty-five years has undoubtedly helped feed, clothe, and shelter many Americans much better than charitable acts ever could. But it has also created levels of social and economic inequalities not known in American since the Depression era.

There are two distinct Americas today. The first one is widely promoted and rightly praised: the richest and most advanced civilization in the history of the world. The second one – of which Richard Nixon spoke more than a generation ago – is still with us: embarrassing and intolerable hunger and want among many young Americans, who by no fault of their own, suffer and consequently carry the scars of impoverishment with them into adulthood.

When Bread For All Food Pantry started in 2013, its leadership conversed of how to work with our neighbors to combat hunger and accompanying poverty. Work and education programs, community gardens, and child care are components of this ongoing conversation. A stark reality, however, casts its shadow on those speaking one to another in this conversation: we live in a system that, by design, perpetuates the status quo. 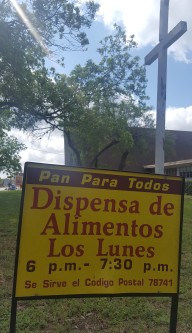 Your compassion, food and financial donations, and willingness to interact with and serve hungry neighbors will be needed for the foreseeable future as the food pantry era shows no signs of coming to an end, even with the national unemployment rate – 3.9 percent as of April 2018 – near its lowest rate since the early 1970s.